Can Botox Earlier in Adulthood Prevent Wrinkles Later On? Cosmetic Surgeon Dr. Richard Buckley Weighs In on the Debate

There’s a fast growing demographic among women seeking cosmetic Botox and other injectables. Ironically, it’s women ages 19 to 34, many of whom don’t have the very wrinkles and deep lines that Botox injections aim to treat. CBC News in Canada reported that more 20-somethings are getting Botox in Canada to, like their U.S. counterparts, prevent the deep furrows between the brows and other facial lines that make us look older—even angrier. So, why has there been a 41 percent increase in Botox treatments among 19- to 34-year-olds? “Wrinkle prevention,” according to Dr. Richard Buckley, cosmetic surgeon and medical director at MilfordMD Cosmetic Dermatology Surgery & Laser Center, in Milford, Penn. 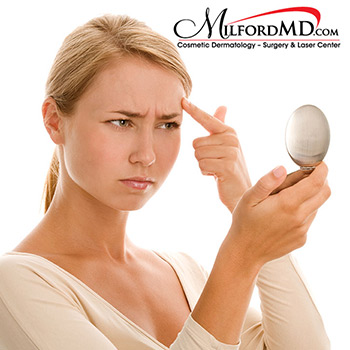 Can botox earlier in adulthood prevent wrinkles later on? MilfordMD explains why more and more young patients are seeking Botox injections before the appearance of any fine lines or wrinkles.

“Botox injections can positively affect skin quality by reorganizing collagen. The skin appears more radiant. We’ve seen this effect with all neuromodulators on the market, including Botox, Dysport and Xeomin.”

[/twocol_one_last]
“There is evidence in the scientific literature to suggest Botox treatment early in adulthood can help prevent wrinkles later in life,” Dr. Buckley says. One study, by a researcher who studied twins, reported on his evaluation of wrinkles in 38-year-old twins who had received Botox injections in the prior 13 years. One twin had far more treatments. She received Botox injections in the forehead and glabellar region (between the brows) two to three times a year for 13 years. That same twin also received Botox treatment around the area of crow’s feet twice in the last two years. Her twin sister, on the other hand, had Botox treatment in the forehead and glabellar area, but only twice in the 13-year period. “The researcher found that forehead and glabellar lines were not evident when the face was at rest in the twin who had more Botox but were visible in the less-treated twin. The regularly-treated twin also had less noticeable crow’s feet than her twin sister. The women, however, had comparable wrinkling and aging in other parts of the face that were not treated by Botox,” Dr. Buckley says.

The thinking behind the potentially positive long-term effect of Botox is that the neuromodulator works by relaxing the muscle. So, the muscles doesn’t work as hard over the years to carve facial lines from constant facial expressions and contractions, according to Dr. Buckley. There is also the thinking that Botox injections positively affect skin quality, by reorganizing collagen. The skin appears more radiant, as a result,” he says. “We’ve seen this effect with all neuromodulators on the market, including Botox, Dysport and Xeomin.”

While there is evidence indicating Botox is helpful for slowing the appearance of aging, Dr. Buckley says it’s much more important to people to think about how sun exposure and lifestyle impact skin aging. “Wearing daily sun protection, eating nutritious foods, drinking plenty of water and not smoking are probably the most important things anyone can do for the health of their facial skin and to prevent skin aging,” Dr. Buckley says. “There are also a host of cosmeceutical and skin care products that can help to keep the skin hydrated and healthier.”

And for those who choose to make Botox or other injectables part of a healthier skin regimen, they should take steps to go to experienced physician providers for those injections, Dr. Buckley says. “Botox, Dysport and Xeomin are drugs that affect the body. It pays to go to a physician provider who has lots of experience in using these neuromodulators for cosmetic purposes,” Dr. Buckley says. “The reason is complications can and do occur. These include temporary facial drooping. Providers need to have a keen understanding of the facial anatomy and injection techniques to avoid these complications.” When delivered by an experienced provider, Botox and other neuromodulator treatments are lunch-time procedures, done in the physician’s office and requiring no recovery, he says.