Both men and women have breasts, but men don’t have mammary glands. Males may develop excess fatty tissue in their breasts and / or non-mammary glandular tissue, causing their breast tissue to enlarge.  Gynecomastia is the medical term for enlarged male breasts and comes from the Greek words for “women-like breasts.” This condition is very common, affecting an estimated 40 to 60 percent of men to varying degrees. There is no known cause in the vast majority of cases of male breast over-development, but common cases are due to a familial tendency, weight gain or as a result of some medications.

Men with enlarged breasts are often reluctant to go the gym, beach or other public places where their chest might be seen. In fact many men wear undergarments to smooth out and conceal enlarged breasts. These undergarments range from binders and bras to a combination of the two. Men are often inhibited by what they think are unsightly breasts and exercise or weight loss may not be effective in resolving the enlarged tissue.

At MilfordMD Dr. Richard Buckley uses a combination of powered microcannular liposuction and laser lipo sculpture to reduce enlarged male breasts. The procedure is very effective and is done with the patient awake and using tumescent local anesthesia. No stitches or cutting is required. Infrequently there may be some tough glandular tissue directly beneath the nipple which is then removed via a small incision at the base of the nipple.

If only fatty tissue is present in the enlarged breasts then liposuction and laser liposculpture alone can give an excellent result. If significant glandular tissue is present then I remove the excess tissue by performing gynecomastia surgery. (pdf from Connections Magazine – 2012)

The development of gynecomastia, enlarged breasts like a woman, may depend on several factors, or merely genetics.

Having larger male breasts is often related to a hormonal imbalance, which can result from medications or lifestyle. Examples of commonly prescribed medications that may cause gynecomastia include: 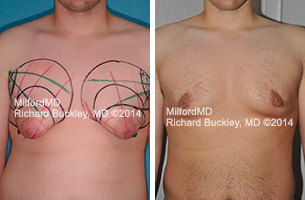 Understanding the cause is an important first step in treating the condition. It is important to rule out the more dangerous underlying conditions, including male breast cancer, before addressing the cosmetic concern.

There are two things I look for when treating gynecomastia: How much of the visible breast enlargement is due to fat and how much is due to underlying glandular tissue. In most men, we have to take out not only the excess fat but also the enlarged breast glands. These sit beneath the nipple and areola. Fatty tissue is liposculpted away. If glandular tissue is enlarged, I then make a small incision just under each of the nipples, in the pigmented areola. The gland easily slides out through the incision. I close the incision with only or mostly sutures under the skin.

The entire procedure is done with only a local anesthetic with my patients are awake and comfortable. Patients go home after the surgery and I recommend rest for a day or two (depending on how much tissue I remove). Men usually wear an elastic chest binder 24 hours a day the week following the procedure and part-time the week after that. Otherwise, most report little if any pain and minor discomfort.

This is one of the most gratifying procedures I do. Men, who are on a private emotional rollercoaster because they have enlarged breasts, emerge from the procedure as if we literally took a weight off their chest. In my experience, men who have the procedure have had little downtime and were very happy with the results.