People who have suffered with acne, rosacea and sun damage are excited about BLU-U™ Blue Light Photodynamic Therapy. It is a relatively simple new procedure combining a medication with a blue light. It is not a laser but a light treatment.

“There is a new hope for millions of people who struggle with these types of skin conditions,” says Marina Buckley, MD of MilfordMD Cosmetic Dermatology Surgery & Laser Center in Milford, PA. 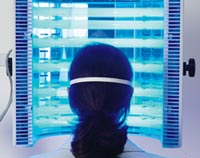 Not exclusive to teenagers, many young adults, people in their 20’s and 30’s, have trouble with acne that is hard to control. We know there are many acne treatments out there for you to try and it can be overwhelming. If you have moderate acne and are uncomfortable taking antibiotics or are unhappy with your current topical treatment results, BLU-U® blue light therapy – using light without drugs or antibiotics – may be something for you to try.

What is BLU-U Blue Light Treatment?

The BLU-U is a unique blue light that kills the P. acnes bacteria in your skin. Treatments are simple – you sit with your face close to the light for a short time at a schedule set up by your doctor, approximately a 17-minute session about once or twice per week. The treatments may go on for five weeks or so. It’s safe, it’s not hot, it’s not painful. After some weeks, the blue light can help control your acne.

Traditional therapies for acne involve keralytic agents, such blu light follicles as the retinoids, which thin the top layer of skin and unplug the oil glands; topical antiseptics and antibiotics, which diminish the number of bacteria in the skin; and oral antibiotics, which similarly diminish the bacteria. These treatments have their benefits, but also have their limitations of being inconvenient, and occasionally toxic.

Photodynamic therapy (PDT) represents an entirely new method of treating acne. With photodynamic therapy, a medication that is activated by light is applied to the skin. After a short period of time, the medication is then washed off and the skin is exposed to the BLU-U™ Blue Light system. The BLU-U™ light energy causes the release of singlet oxygen molecules, which have the biologic effect of eliminating P. acnes, the bacteria responsible for acne. BLU-U treatment also has the unique ability to minimize pores and reduce oil glands, effectively treating stubborn acne, rosacea, and diminishing the appearance of some acne scars. Active acne can improve dramatically and the treatment may eliminate the need for oral antibiotics or Accutane.

There are many benefits to BLU-U Photodynamic Therapy. The side effects are minimal. It’s gentle (no needles or surgery) and the skin improves rapidly. The number of treatments varies depending on the condition and the severity. You may only need one treatment or 4-6 treatments a couple weeks apart. “Either way, whether it’s one or more treatments, the results are astonishing,” states Dr. Buckley.

The BLU-U is generally indicated to treat dermatological conditions. The BLU-U is specifically indicated to treat moderate inflammatory acne vulgaris. When using the BLU-U for acne, do not use this device with photosensitizing drugs. During light treatment patients and medical personnel should be provided with blue blocking protective eyewear as specified in the BLU-U Operating Manual.