The First of Its Kind – Ablative Efficacy with Fast Recovery 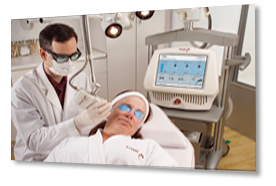 The Fraxel re:pair laser is the only CO2 laser on the market that delivers the efficacy of conventional bulk ablative lasers-without the prolonged downtime, risks or complications.

Though it’s the newest product in the Fraxel family, the Fraxel re:pair laser has already started revolutionizing the industry. It delivers dramatic results in a single treatment-without weeks of downtime. It’s also a compelling option for patients who want remarkable results without surgery.

Unlike traditional CO2 lasers, which perform a thin, general ablation of the entire skin surface, the Fraxel re:pair laser uses microscopic treatment zones (MTZs) to ablate tissue deep within the dermis. Even though the laser does not protect the stratum corneum, the unique Fraxel technology spares much of the surrounding healthy tissue in the dermis. This results in immediate coagulation, tissue shrinkage and skin tightening.

Before and After Results Fraxel re:pair

Powerful and versatile—Treat many indications with a single system

Treats up to 4 times faster than any other ablative fractional device.

The intuitive, touch-screen interface guides you through the parameter selection—superficial to deep (5-70 mJ) and mild to aggressive (5-70% coverage). The system optimizes the microscopic spot size for each energy level, maximizing penetration while minimizing bulk heating in surrounding tissue.

The only fractional ablative device with FDA clearance for vascular dyschromia.

Fraxel re:pair is a single-handed, single-operator treatment. Plus, it is the only fractional ablative device with built-in smoke evacuation, minimizing plume.

The unique Fraxel scanning technology, combined with the precision and effectiveness of a CO2 laser source, reduces the degree of risk for lines of demarcation or long-term side effects compared with traditional CO2 lasers.

The Fraxel re:pair laser is backed by extensive research with more than three years of clinical follow-up with over 2,500 patients and 5,000 histologies.